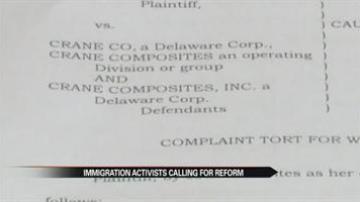 GOSHEN, Ind. -- According to court documents, a Goshen woman is suing her former employer, Crane Composites, claiming she was wrongfully fired as a human resources manager. She alleges the company hired undocumented citizens to work at its Goshen locations.

"It's 17 percent of Elkhart County. And if you consider there isn't much of a Hispanic population in Nappanee or Elkhart, where is the influx of that 17 percent? Goshen," said Jeremy Bernstein, Elkhart County community immigration reform organizer.

Bernstein has lived in Goshen for 18 years. He says in his time here, the Hispanic and Latino populations have grown significantly.

"People are leaving Mexico wanting to find a better life and are willing to do that hard work. That's why they're coming to the RV factories in Elkhart County," said Bernstein.

It's hard to calculate just how many of those workers are undocumented.

Tony Flora, President of the Northern Indiana American Federation of Labor, says they are forced to live in the shadows.

"With people who know that they don't have legal documentation, or that it's questionable documentation what their documentation is, they're not really going to jump out and self-identify," said Flora.

Flora works to give all local workers a voice by helping organizers like Bernstein to push for a better pathway to citizenship for illegal immigrants.

"We know that America has been built by immigrants. Immigrants have always been a great source of driving the U.S. forward, which has always made our economy stronger," said Flora.

Bernstein says the lawsuit against Crane Composites is yet another example of a broken system.

"When it comes to corporations, what this immigration reform bill does creates a system. A part of it is to make eVerify better and require all companies to use eVerify," aid Bernstein.

We contacted Crane Composites and the woman who filed suit against them, but have not heard back from either.