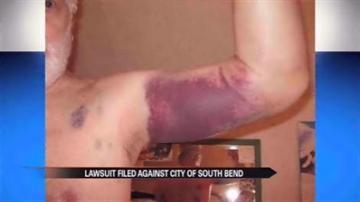 SOUTH BEND, Ind. -- The city of South Bend is facing a lawsuit involving three city police officers who are accused of using excessive force to remove a 71-year-old man from an Amtrak train in 2008 of New Year's Eve.

The city of South Bend tried to have the case thrown out, but a federal judge says it will go to trial.

The acting city attorney said those officers acted reasonably based on the facts at the time.

Clifford Rosen, 71, says the South Bend Police officers shot him with a taser and used excessive force to remove him from the Amtrak train in which he and his wife were traveling on in 2008.

South Bend attorney Stan Wruble is representing the Rosens who are suing the city and three of its police officers. The three officers named in the lawsuit are Jason King, Christopher Slager and Andrew Witt. ABC 57 has learned that Jason King no longer employed by the South Bend Police Department.

Rosen, a Parkinson's patient, was so persistent about finding out when dinner would be served, Amtrak staff called the police to remove him from the train as they were passing through South Bend.

"The officers continued to yank his arm behind his back, the stomped on his back. They punched him in the back and the ultimately tasered him three times all while being in a small train berth compartment,” said Wruble. “My clients want to make sure that no one else's grandfather or father or anyone for that matter is illegally detained, unlawfully arrested and is tasered three times for no rule or reason."

Aladean DeRose, the Interim City Attorney, was not available to go on camera about this case but did issue this statement about the lawsuit: "The facts  from the city's perspective indicate Mr. Rosen acted inappropriately and the police responded reasonably under the circumstances existing at that time."

Wruble says his rebuttal to the city's statement is the jury will decide how reasonably the officers were really acting.

A trial date has not been set. At this point it is unclear if the case will be heard in the United States District Court in South Bend or in Hammond where the lawsuit was originally filed.