Lawsuit says pizza can cause cancer 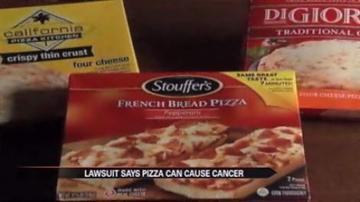 People convinced that pizza can cause cancer have filed a $5 million lawsuit against a frozen pizza maker.

The suit targets "Nestle Foods" for including what they call a "toxic carcinogen" in the cheese. Digiorno, Stouffers and California Pizza Kitchen are also named in the suit.

The suit also says the company is "placing profits over public health" by not removing trans fats from the pizzas.

"It shouldn't have toxic food additive that's been banned all around the world," said Greg Watson, Attorney. "We want all the money they have ever made from the frozen pizzas."

This is not the first trans fat lawsuit. In 2005, McDonald's paid $8.5 million to settle two lawsuits alleging they misled consumers about trans fat levels in its food.