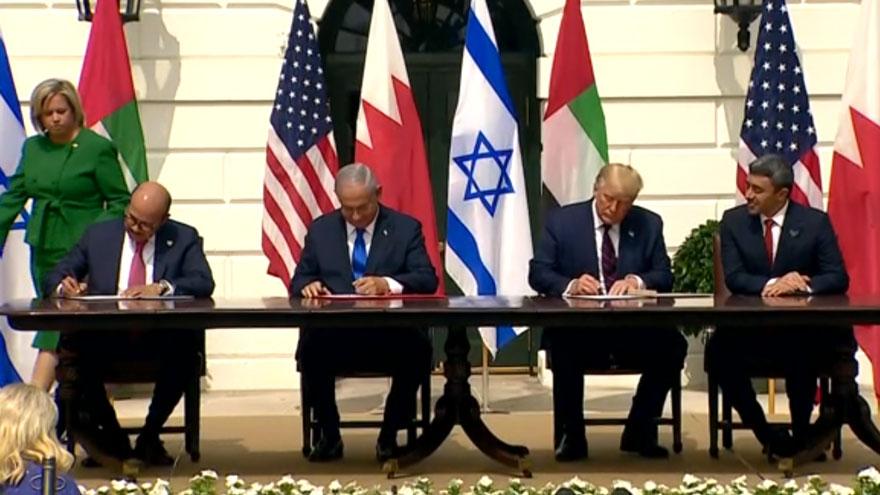 ABC NEWS -- President Donald Trump on Tuesday presided over the signing of historic diplomatic pacts between Israel and two Gulf Arab nations that he hopes will lead to a new order in the Mideast and cast him as a peacemaker at the height of his reelection campaign.

Hundreds of people amassed on the sun-washed South Lawn to witness the signing of agreements between Israel and the United Arab Emirates and Bahrain.

The bilateral agreements formalize the normalization of the Jewish state's already thawing relations with the two Arab nations in line with their common opposition to Iran and its aggression in the region.

The agreements do not address the decades-long Israeli-Palestinian conflict. While the UAE, Bahrain and other Arab countries support the Palestinians, the Trump administration has persuaded the two countries not to let that conflict keep them from having normal relations with Israel.

Trump's political backers are looking for the agreements to boost his standing as a statesman with just seven weeks to go before Election Day. Until now, foreign policy has not had a major role in a campaign dominated by the coronavirus, racial issues and the economy. The pandemic was in the backdrop of the White House ceremony, where there was no social distancing and most guests didn't wear masks.

The agreements won't end active wars, but supporters believe they could pave the way for a broader Arab-Israeli rapprochement after decades of enmity and only two previous peace deals. Skeptics, including many longtime Mideast analysts and former officials, have expressed doubts about their impact and lamented that they ignore the Palestinians, who have rejected them as a stab in the back by fellow Arabs. Israeli Prime Minister Benjamin Netanyahu has insisted that Israel has only suspended its plans to annex West Bank settlements.

Yet even the harshest critics have allowed that the agreements could usher in a major shift in the region should other Arab nations, particularly Saudi Arabia, follow suit, with implications for Iran, Syria and Lebanon.

Other Arab countries believed to be close to recognizing Israel include Oman, Sudan and Morocco.

In addition to the bilateral agreements signed by Israel, the UAE and Bahrain, all three are signing a document dubbed the "Abraham Accords" after the patriarch of the world's three major monotheistic religions.

"This day is a pivot of history," Netanyahu said. "It heralds a new dawn of peace."

The Palestinians have not embraced the U.S. vision. Palestinian activists held small demonstrations Tuesday inthe West Bank and in Gaza, where they trampled and set fire to pictures of Trump, Netanyahu and the leaders of the UAE and Bahrain.