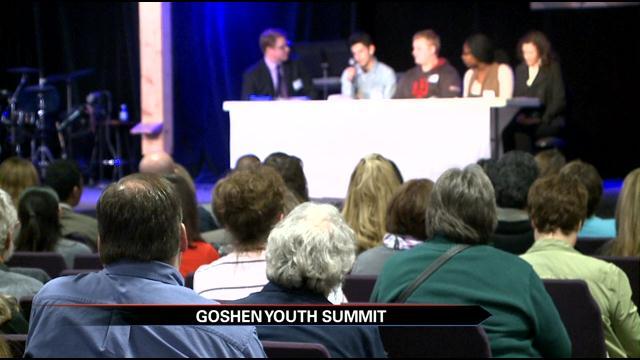 Thousands of Michiana children grow up in the system, either in foster care or spending time in juvenile detention.

Friday, leaders from across Elkhart County gathered in Goshen to talk about improving the lives of foster children and juveniles across the Hoosier state.

Many believe Friday's event could be the think tank DCS needs to lower that number.

“Anything is possible even if you come from a bad background,” said 19-year-old Louis Michas.

And Michas believes he is proof of that statement.

As a teen he was turned over to that state after constantly getting into trouble.

“When I went to court they found out I didn't have my parents and I was basically on my own and from then on I got put on foster care,” he said.

Friday, he was one of several youth speakers sharing their experiences with DCS.

He hopes his story can bring more attention to a program that changed his life.

The community summit for children was held just days after Governor Mike Pence called for an increase in DCS funding.

While not officially included in the budget proposal the governor submitted back in January, the increase would bring the total statewide spending on case management to more than $107 million for the 2014-2015 fiscal year.

The general assembly has until April 29 to approve the budget.

“The workers that are in the system now need to be paid more and we need more case workers,” she said.

Senator Carlin Yoder revealed he was a foster parent and is working to bring more support to the program as a legislator.

“We've made some great strides over the last four or five years but we've got a ways to go,” said Senator Yoder. “And I think with the budget coming up this year hopefully we can take some bigger strides in those areas and provide the help that's needed.”

And that help changed Michas' troubled past.

Now a father and college student at Indiana University South Bend, he's optimistic about his future.

“Seeing him running around is my motivation to keep doing well in school because he's definitely not going to have the life that I had,” Michas said.