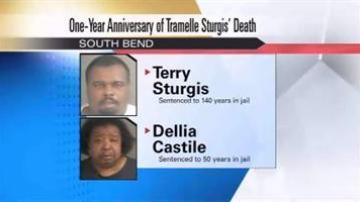 ST. JOSEPH COUNTY, Ind. -- November marks the one-year anniversary of the death of 10-year-old Tramelle Sturgis at the hands of his father. A tip about the abuse was called into the Department of Child Services, but the agency is being accused of not doing enough to investigate the claims.

Tramelle was beaten to death by his father, Terry Sturgis, and his grandmother, Dellia Castile, did nothing to stop it. Both are serving prison sentences.

The prosecutor admitted the system in place failed and now legislators are looking at ways the agency can better serve the children who desperately need help.

"We talked about maybe the failures of DCS, or the failures of society not to recognize these children were in danger,” said Mike Dvorak, St. Joseph County Deputy Prosecutor.

According to a DCS spokesperson, on May 27th, months before Tramelle died at the hands of his father, a call came in to the DCS child abuse hotline in Indianapolis.

The following day and the day after, a local DCS case worker from the St. Joseph County DCS office visited the Sturgis house. Both times no one was home.

On the 3rd attempt, on May 31st, the DCS worker found the family at home and conducted interviews.

But the case worker reported there were no signs of child abuse.

The DCS website states on June 1st the case worker stopped by a school of one of Sturgis children unannounced for an interview and on June 2nd that same case worker concluded the investigation that there were no substantial signs of child abuse after visiting another Sturgis child at school.

Dvorak says since Tramelle's death, the local DCS Director Linda Cioch has initiated open communication with his office and St. Joseph County police agencies to strategize how the 94 employees can work better with law enforcement.

“There are things we are doing with DCS going forward hopefully they'll change some systems and respond better in the future,” said Dvorak.

Dvorak said so far they have met twice and they have a meeting scheduled next month.

One of the things discussed is the possibility of having a regional or county wide call center to field those child abuse tips. That's something the team of legislators are recommending as well.