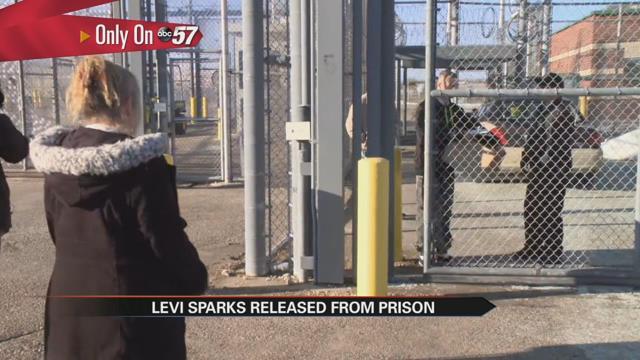 On Thursday the first of the ‘Elkhart Four’ was released from prison.

Just a couple weeks ago, Levi Sparks was re-sentenced to nine years in prison after facing over 40 years when he was charged for felony murder.

With credits and time already served Sparks is now a free man.

Thursday night his friends and family met for a homecoming party in Elkhart.

When sparks was re-sentenced in early January, his mother April Erdos, said she would treat her son to a special meal on the day of his release.

She kept her word.

Erdos giggled at her son’s unusual request. But for a young man who went away at age17 any sandwich shop is a luxury.

“He was a teenager, he was a minor. So he grew up in prison, he will be 21 on February 5th so he ultimately became an adult in prison,” says Vince Campiti, Sparks’ attorney.

Campiti says he has represented Sparks since 2012 and has seen his client mature.

“He served as a model prisoner he tried to get involved in many different things got his GED did really every, took every step he could to benefit from his time there,” says Campiti.

On Thursday Sparks’ efforts paid off.

Friends and family waited outside the Wabash Valley Correctional Facility with smiles to bring their boy home. Today Sparks says with the help of his support system he is now a man.

“I knew I had a support system because they fought all the way through the case with us. But ya know still seeing that there’s still sticking by us through the whole thing, it’s great. Just to see their happiness on their face that all this worked out for us, it’s awesome,” says Sparks.

Sparks says he will live in Elkhart and has a job lined up in the area. He also plans to take college classes.

The next of the ‘Elkhart Four’ expected to be released is Blake Layman whose mother attended Sparks’ homecoming dinner.