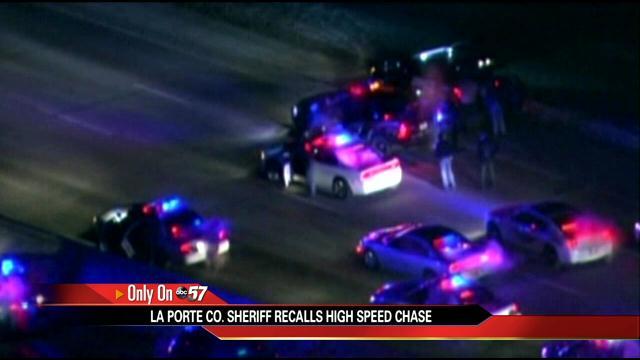 A police chase began in Illinois, just thirty miles outside of Chicago, and ended in Michiana Friday night.

Police are saying the chase ended with the best possible outcome - an arrest without shots fired.

Captain Mike Kellems, of the La Porte County Sheriff's Office was humble about his work with the negotiation.

He said it was team work at its greatest level that allowed them to apprehend 34-year old Vincent Toliver without any shots fired.

“You talk about somebody that's firing shots and an armed robbery, fleeing law enforcement, a two-state chase, a dozen law enforcement agencies, it's a big deal,” said Kellems.

The chase lasted for 75 miles.

“The Indiana State Police picked up the chase once it crossed into Indiana,” said Kellems.

Nearly a dozen law enforcement agencies jumped in to help after police say Toliver fired a gun inside a Walgreens near Chicago.

The pursuit then began.

“Goal is that we want him to surrender, we want everyone there to be safe. We want to be able to clean it up and move on,” said Kellems.

It was not so easy; to just clean up and move on.

“Why are we here? What's got this guy going? What's got him agitated and what is it going to take to resolve it?” said Kellems.

He asked himself these questions as he and his team worked to get to the bottom of them.

“Outside of the five minutes on the telephone, we never did have any verbal communication with him,” said Kellems.

The suspect was a man said to be armed and dangerous, and police were outside of their cars prepared for the worst.

“There was a point where he exited the car and we were hoping at that point that he was going to surrender and unfortunately he came out with a weapon in his hand,” said Kellems.

Captain Kellems continued to talk to him, hoping he would not hurt himself, or an officer.

“I talked to him for about an hour and there was a point when we were able to distract him and that's when members of the SWAT team from Michigan City Police Department and the sheriff's office utilized bean bag rounds to take him down,” said Kellems.

It was an hour and a half of convincing the suspect, to do the right thing, and even though a major interstate was backed up for miles, Kellems says he would not have asked for it to go any other way.

“We certainly don't any of our citizens or anyone traveling through our area to be hurt. So, we take this as an absolute win,” said Kellems.