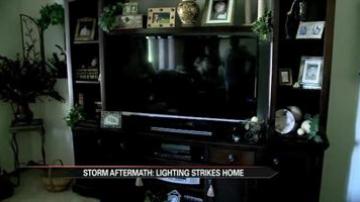 SOUTH BEND, Ind. -- While some people were left unscathed by Tuesday night's storms, others suffered severe damage from the straight line winds and lightning.

Sandybrook Drive resident Doug Lawson says he has never seen a storm like the one Tuesday night.

He awoke to a loud boom at 5 a.m. caused by a lightning strike.

Electricians say it's responsible for frying almost every appliance in Lawson's house.

He says the lightning strike took out about $5,000 worth of electronics and appliances.

"No TVs out of three, no computer, no refrigerator inside the house," said Lawson.

That list doesn't include the stereos, garage door motor and chest freezer full of $100 worth of meat for this weekend.

"It was just a major power surge to all of the appliances," said Lawson.

Even surge protectors were no match Lawson says.

"Everything in this house is on a surge protector. But yet it picked and chose what one was plugged into what and what it blew," said Lawson. "Just never expected it you know? You just think it's a normal, average storm that we get every season. We knew it was coming in and it just happened."

Lawson says he and his mother are working to file a claim with their insurance company-but it could take anywhere from five to ten days to determine a final total of how much last night's storm will cost them.