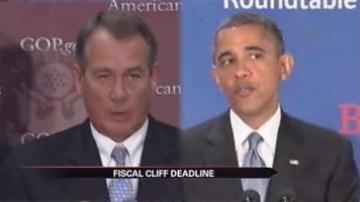 Over the past few days, there have been a series of proposals and counter-offers between Republicans and the President.

The sticking points are spending cuts, Republicans want specifics. And tax rates for the wealthy which the White House said is a deal breaker.

"A position that said we want tax cuts for the wealthiest Americans is not one the president could ever sign," said Jay Carney, White House Press Secretary.

"His plan does not fulfill his promise to bring a balanced approach to solving this problem. It's mainly tax hikes," said John Boehner, Speaker of the House.

According to a new ABC News-Washington Post poll, nearly twice as many Americans approve of the president's work on the fiscal cliff, over the GOP approach.