Local activists: It's time for the city to let the skeletons out of the closet! 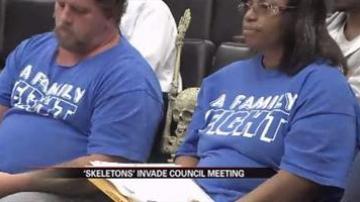 Many in the community are fed up and want to move on. That's why the local activists have been relentless in their demands for answers and for the truth.

Those that spoke at the meeting feel the latest move by the city, to try and suspend the circuit court proceedings until it goes to federal court, is just a stall tactic.

People think the city is trying to keep the tapes from ever being played, which is why some are going to great lengths to make sure their voices are heard.

Other hot topics were, of course, the 10-day suspension of South Bend Police Officer Jack Stilp. Stilp reported a threat made to him by Metro Homicide Commander Tim Corbett, who is believed to be on the tapes.

Then there is the search for the next police chief. Activists do not trust the city is being completely transparent about the search process.

"A lot of things are going on in the city right now that need closure and it seems like a lot of things have been swept under the rug or put away in closets and I think it's time to let the skeletons out of the closet so the public can have some closure," said local activist Jesse Davis.

Mayor Buttigieg also addressed the common council during Monday's meeting. He said the city is now advertising the opening of the position for police chief. The mayor said, as part of the search process, a town hall meeting has been scheduled for 6 p.m. October 4 at the Kroc Center in South Bend.

Still, the community is not stopping with the skeletons. Activists plan to march to the County City Building at 5:30 p.m. Tuesday night to continue their push for answers.