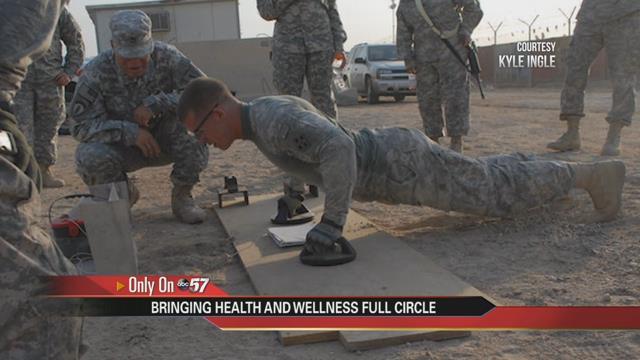 “I partied the night before my SATs so I missed them the next morning, slept right through them,” said United States Army Veteran Kyle Ingle.

That mistake became one of the best things that Kyle Ingle had done.

“I was at a high school football game with one of my buddies and I walked by and a recruiter was standing there and he said something to me and I said ‘I’ll join only if I can become an Army Ranger’ and that was exactly what he wanted to hear,” said Ingle.

Fresh out of high school, Kyle joined the Army, but not as the title he originally planned.

“I ended up going into the Military as a Scout,” Ingle said.  “It’s kind of a few tiers below Rangers but it was still the same style of stuff that I knew what wanted to do which was to be more of the protect and serve rather than the back end work like admin and stuff like that.  I wanted to be boots on the ground and making an impact.

The best part about being in the Army for Ingle was the bond shared with his fellow soldiers.

“The best part of being in the Army without a doubt was the brotherhood and the comradery that you really get especially within a tight-knit community like being in a scout platoon,” said Ingle.  “You always have to know that someone has your back.  And you’ve got that tight-knit community and I think between that and being developed as a leader in the military, all of that compounded into why we opened full circle nutrition.”

“She’s an instructor to a couple of our classes and also she does so much behind the scenes work,” Ingle said.  “She also has this incredible presence within the club of really just being that powerful woman figure that a lot of other women are able to look up to.”

At Full Circle Nutrition and Fitness, the Ingle’s along with others who work there, do a combo of fitness and nutrition of course because the two go hand in hand together.

An idea that originally started in a parking lot has now moved to a new location of 5,500 square feet.

“What we focus on creating is a community of people within our classes so we have cardio drumming which is taking over the region,” said Ingle. Fit camp, pound fit, Zumba, we’ve got a ton of different classes that we offer for every fitness level”

To bring it all full circle, Kyle tells us what Veterans Day mean to him.

“Veterans Day is really about recognizing the service and the contribution and the sacrifice that people had to give during whatever time they served,” said Ingle. “Veterans Day I think is a love / hate relationship with veterans as well because the last thing we want is recognition at least me personally and a lot of the guys I know and work with.  We never really know what to say when people say thank you.  I think it’s important that veterans do embrace the thanks because people are giving it for a reason and what we did was real.”