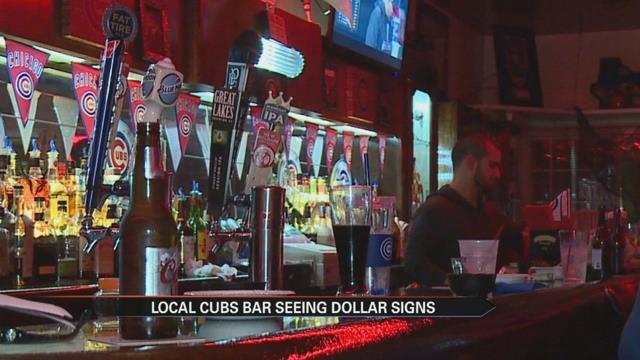 With the Chicago Cubs making it to the World Series, a local bar is seeing an increase in business.

Located on Dunham Street, the Friendly Confines is over ninety miles from Wrigley Field, but they are all about the Cubs.

"Not the Bears, not the Blackhawks. We are a Chicago Cubs bar," said owner Mai Markiewicz.

"This is the very place to go if you’re a Cubs fan. I’ve been a fan ‘until next year’ since I could speak, since I could think for myself," said fan Steve Singleton.

Fan Kaylie Haeck says if she can't be at the game, she always watches from the Friendly Confines.

"I went to my first Cubs game when I was 12 in St. Louis and was just hooked from then. I think it’s the always being so close, always feeling like we’re gonna do it, we could do it, you know they can do it," said Haeck.

While the Cubs have long been known as the lovable losers, fans are hoping "next year" is finally here.

With the game playing on five TVs and projected on the wall, along with a collection of historic Cubs memorabilia on display, Markiewicz says the winning season is bringing a lot of people into the bar.

“It’s not only been great business for the bar but it’s bringing in new people.  I think in the last two weeks, every night we have a new face in here, said Markiewicz.