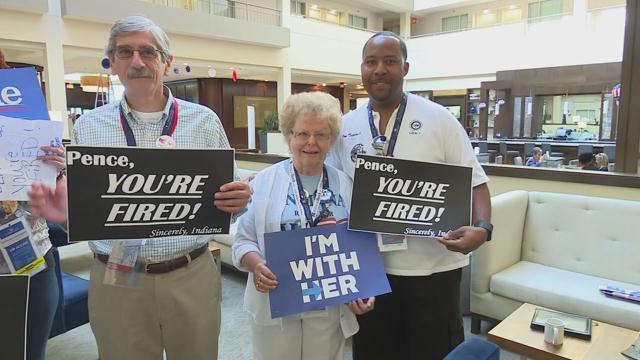 One delegate says she never imagined she would be at the Democratic National Convention Wednesday and she’s excited she got to experience the energy first hand.

Carol McDaniel is the Vice Chair of the La Porte Democratic Party and says after many years of being involved in local politics, she decided to take it to the next level.

“You watch it on TV and you can’t imagine the amount of people now you are here to see it for real. I was fortunate this year that people asked me to run for it and I thought hey I’m gonna try it we aren’t getting any younger,” said McDaniel who is a Hillary Clinton Indiana Delegate.

McDaniel worked for Clinton’s election as a pledged delegate. And even a super delegate from Indiana, who automatically received an invite to the D.N.C., admits she is new to the convention.

Senator Joe Donnelly says the excitement is contagious and it will rev democrats up to get more work done.

“Actually I have never been to a convention but it was great fun to see everybody because it’s about friendship as well and a number of U.S. senators were here who I work with and that was the other part of coming out here was to touch base with them, to work together with them,” said Donnelly.

Senator Donnelly said it was just too much excitement for him so he was headed back to Indiana for some rest .

But McDaniel from La Porte says she’s been waiting a life time for this and is not going to miss these last two days.