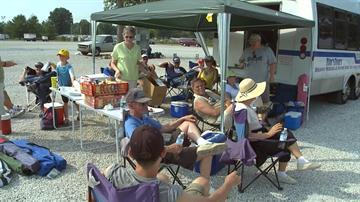 Thousands of fans packed the stands to see their favorite drivers and cars in action at the 2012 Indy 500, among them were a group of Michiana folks who crowded into a bus and drove from South Bend on Sunday morning to see the intense race to the finish line.

“Oh man, I’m telling you, this is why I come back here every year,” explained Tim Lewis, of Tim’s Tours, who has been coming to the race for 30-years.  “You never know what’s going to happen.”

Among the group Lewis brought from Granger, Elkhart, South Bend, Mishawaka and Osceola were some first time attendees like NASCAR fan Darrell Howard

“They go by you so fast, that’s the one difference between Indy and NASCAR, it’s about 40 or 50 miles an hour faster,” Howard described.  “So they go by you pretty fast…they’re just a blur.”

Another Michiana new arrival to the Indy 500 was 9-year-old Jackson Stone.

“You hardly could seem them, like vroom,” described Stone.  “It was unbelievable.”

A number of records were broken, a record number of passes were made and, to the annoyance of fans, the 2012 Indy 500 was the hottest on record.

Still, whether it was their first Indy 500 or their 30th, the Michiana fans agreed it was worth the trip.