Local farmers working to save fruit trees after a rough winter 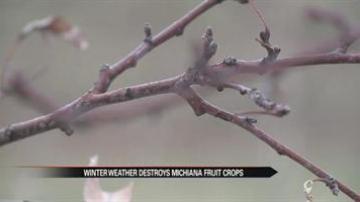 BERRIEN COUNTY, Mich.-- Local farmers are expecting a fruitful year but frost, salt, and mother nature are keeping them from having a bountiful harvest.

Farmers said they are behind on pruning their fruit trees because of the extreme temperatures we had this winter.

Shelton's Farm Market in Niles said they were unable to work a lot of hours in the field this winter because of the freezing temperatures.

Joe Shelton said, “The severe cold weather was a real hamper on their ability to get things done. You had to be a pretty hearty soul to go out in 10 or -10 degree weather and work in the fields.”

For farmers who live on major highways, salt run-off is affecting their grape vines.

“Crops are very sensitive to salt. Even the salt spray. When they plow the roads and it throws the snow in the air, it has a small amount of salt content and you’ll notice some browning of trees," Shelton said.

Fortunately for Shelton's Farm in Berrien Center, their vines are far from the road.

His growers said it was extremely difficult to break through the frozen ground to plant this winter.

"It was extremely muddy and wet and too difficult to get into the fields,” Shelton said.

Bill Teichman at Tree-Mendus Farm said they are busy breaking off dead branches on their fruit trees.

"We are way behind on apple trimming. Normally by the 15th of April we are trimming peaches,” Teichman said.

Teichman said the negative temperatures killed some of the fruit buds on his trees.

He said deer and rabbits have also been feeding on his crops this winter.

“They went around quite a few fruit trees and ate the buds off. It’s hard to imagine making a meal out of buds from a tree. But they did it,” Teichman said.