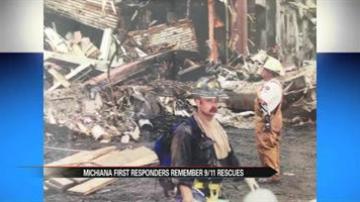 ELKHART, Ind. -- On the anniversary of the terrorist attacks of September 11, 2001, firefighters across the nation are being honored for their service to their communities. Several local firefighters went to help at Ground Zero in the days following the attacks.

“Just the enormity of it. It is hard to explain how big it was. It wasn’t like you could see one side or the other. The piles were so high it would be like looking past a multi story building to try to find the other half," said Elkhart Fire Chief Michial Compton.

Chief Compton and 6 of his firefighters got to the twin towers less than 24 hours after they collapsed.
“If anyone was buried that low that they wouldn’t have been able to survive," said Compton. “You were actually digging with small shovels or by hand and filling debris buckets with whatever you could put your hands on and fill the buckets up with.”

“The memory of the tragedy and just thinking about how many people were lost there. It’s humbling when I think back on it," said Compton. “It was amazing the comraderie of fire departments and people, nobody really knew what anybody was doing in the first few days other than trying to find a survivor.”

Many years later, as a nation, we look back and hope that nothing like 9/11 ever happens again. But Chief Compton says that his hope is that we stick together and try to be prepared.

Chief Compton stayed and worked in the rubble of the twin towers for 3 days. He says he will always remember and never forget the thousands of firefighters that risked their lives on 9/11.

(All photos used in the video are courtesy Michial Compton).