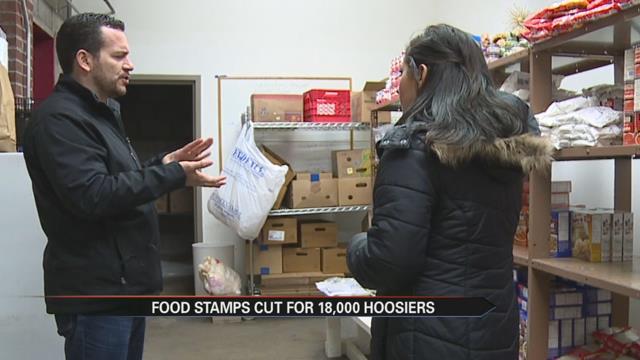 As families across the country prepare to feast this Thanksgiving over 18,000 Hoosiers are without food stamps this month after the state reinforced a work requirement.

Helping those in need is a year-round challenge for organizations like La Casa de Amistad but during the holidays it’s especially difficult.

And it’s getting even harder for some. Thousands of Hoosiers who rely on food stamps to put food on the table have been cut from the program.

Indiana Family and Social Services Deputy Director Marni Lemons says the only people affected by this month’s change are able bodied adults between 18-49 without dependents. They are now required to have a job.

“This requirement actually went into place as part of the Federal Welfare Reform Act. The work requirement was suspended in 2009 during the recession,” Lemons.

Now that the state’s unemployment rate has gone down, Indiana no longer qualifies for that waiver. Earlier this year, people were notified that come August they would have three months to comply with the rule.

“Come November the people who did not comply with the work requirement lost those benefits,” said Lemons.

“They want people to be able to move from government assistance to self sufficiency, which is fantastic,” said Centellas.

But Centellas says just because the state notified people doesn’t mean they were able to prepare.

“They could be so under resourced that they aren’t able to meet that new higher expectation,” said Centellas.

Centellas says that although he agrees with the government’s goal to move to self sufficiency, with Thanksgiving just days away, there could have been a better way.

“One-on-one by family, what’s this family's situation, how can we help them solve it and how can we move them to be independent but you can’t do it with legislation like this,” said Centellas.

So instead he’s doing what he can to make sure these families still have food on the table this Thanksgiving.

“We’re hoping we prepared enough for it, we’ve put aside a little extra budget money so we can hopefully make sure we meet the need,” said Centellas.

For more information about how you can get involved with the La Casa de Amistad food pantry, click here.