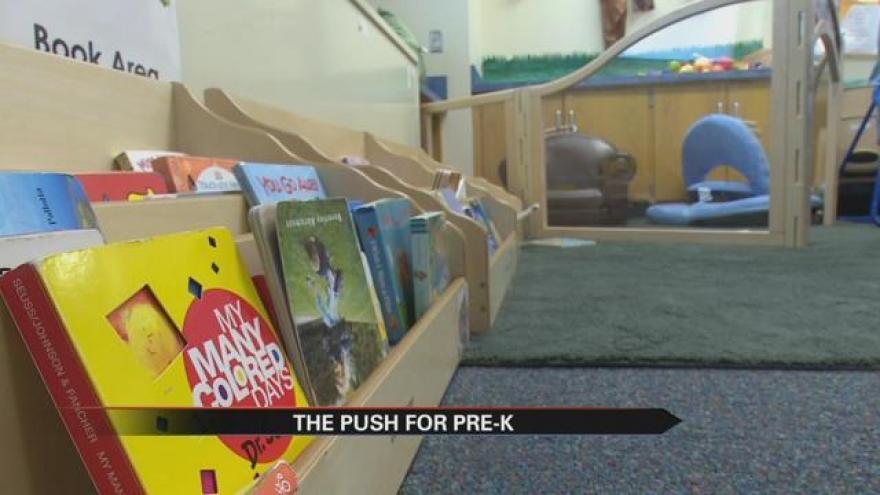 The push for universal pre-k throughout the state continues.

Wednesday, hundreds gathered at the Statehouse to lobby the expansion of access to early childhood education for Hoosiers.

And groups from St. Joseph County hope that could mean more funding for a local resource that been a leader in pre-k programs statewide.

“Let’s not let too much time go by, let’s get this thing off the ground, that way we can see children come to school,” said Kathy Guajardo, Head Start executive director. “Every child needs this and we’re really excited about it and we hope that it will come to fruition very soon.”

“Today we still have 500 children that we know that are also ready and eligible and ready to go into a program but we just don’t have the space right now because our funding is capped,” said Guajardo.

The consortium has taken on thousands of kids in the handful of years it’s been open.

It helps bridge the gap for young minds before they start school.

It also helps prepare families for the transition.

“The goal being that if we train our parents we can also make sure that the child is going to receive benefits from the long-term perspective,” she said.

Emily Rupchock, the coordinator of Ready to Grow St. Joe, is hoping she could bring and advocate’s perspective to downstate dialogs.

“Nine of us from St. Joseph County went down to the Statehouse in Indianapolis to support the expansion of pre-k in Indiana,” she said.

Her group lobbied for proposed legislation that would see funding for the program double.

And they met with representatives in the hopes this county could be included in the conversation.

“What we’re hopeful for is that it will continue to expand beyond the five counties that were selected in 2014 for the On My Way Pre-k Pilot and that St. Joseph County is a recipient,” said Rupchock.

The new bill before the house would see an additional $10 million investment into the program.

By comparison Glenda Ritz, the former superintendent, pledged $150 million when she was running for reelection.

Ritz’s successor, Jennifer McCormick said early learning is a priority for her administration. She said in a statement:

“High-quality early childhood experiences are critical to achieving kindergarten readiness for all children. I look forward to working with Governor Holcomb and the legislature on providing high-quality prekindergarten services for Hoosier children."