NOW: Local health experts break down what you need to know as the measles outbreak continues to spread

SOUTH BEND, Ind. – Health experts are urging parents and health providers to be on guard as the number of confirmed measles cases has now climbed to a 25 year record.

So far there are 704 confirmed cases across the country. There have been 43 cases confirmed in Michigan, and one in Indiana. As the cases creep closer to Michiana, local health experts say they’re on the lookout for it. 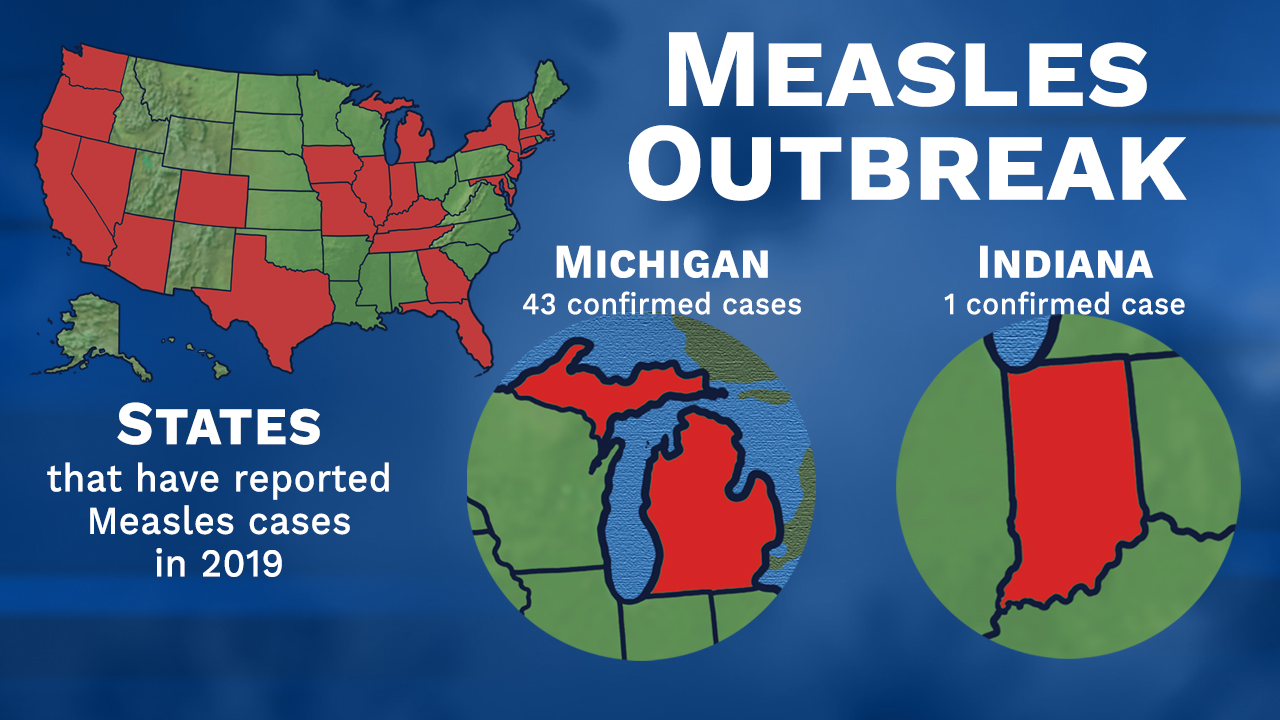 Symptoms of the measles can feel similar to early flu symptoms, including headaches, fever and body aches. All those symptoms will lead into the tell-tale rash.

Health experts continue to stress the importance of the vaccination.

"Vaccines are a true public health, effective program,” said Gillian Conrad with the Berrien County Health Department. “It is something that works, and we know that. We know that the higher vaccination rates, the lower amounts of illness we see in our community."

If someone is unsure if they were given two doses as a child, they should go ahead and get another vaccination.

"If you are unsure of your vaccination status for the measles, please get a booster; get that vaccine,” said Conrad. “You can't get too many vaccines; you're not going to do yourself any harm by getting that vaccine.”

It also won't wear off. Once someone has received the two doses they will be protected for life. But only one dose was recommended before 1989, so anyone born before that year should get a second dose if they have not already.

There are some circumstances that might put people at a higher risk for the measles.

"People who might be undergoing cancer treatments, chemotherapy, have any kind of chronic illness that suppresses their immune system, they're at a higher risk of contracting measles," said Conrad.

Plus she says children can't be vaccinated until they're one year old which makes them highly susceptible.

There have been no confirmed cases in Berrien County, so Conrad says parents of children younger than one year old should not be overly worried. However, the illness is highly contagious.

"Even if an infected person was in a public place, a room, they can leave bits of the virus in the air for up to two hours even after they've left," said Conrad

"Especially with so much travel, it's not confined to any particular community. So we fully expect to see it here at some point," said Mark Fox, the deputy health officer at the St. Joseph County Health Department.

St. Joseph County has already had some suspected cases.

"They were concerning enough that we've put patients in isolation. We've contacted the state,” said Fox.

Even though those didn't turn out to be cases of the measles, Fox says the community needs to stay alert.

"Parents, health care providers really need to be on guard for it,” he said. “They need to be aware of what it looks like and when to suspect it."

For more information on symptoms to look out for, click here. Fox says anyone who suspects they might have the measles should visit their doctor or a hospital immediately.

"We will continue to experience outbreaks of these preventable illnesses until we can increase our vaccination rates across the country," said Conrad.

She encourages anyone with questions to reach out to the Berrien County Health Department. She also says the department has programs to cover the cost of the vaccine for people without insurance.