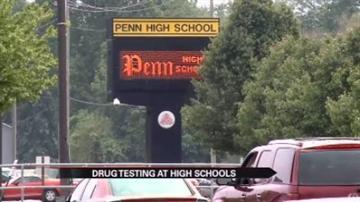 MISHAWAKA, Ind. -- A Penn High School student says she was drug tested for no reason. The sophomore says the school drug tested her after some of her classmates told school officials she does drugs.

The school has the right to randomly drug test its students, but its policy says officials need to have reasonable suspicion the student is under the influence of drugs or alcohol when they administer the test.

Alyssa Nemeth, a sophomore at Penn High School, was sitting in math class when she was suddenly pulled out of class for a random drug test.

"They were just like, we heard you were smoking marijuana from somebody and I was like no and they were like OK, well we have to drug test you," said Nemeth.

Nemeth says her bag was searched and then she was taken to the nurse’s office where a drug test was administered.

"I waited for a minute to see if they were going to call my grandma or somebody. I didn’t say anything, but they should have," said Nemeth.

But her parents were never called. The test came back negative and when it did she was only asked to sign a piece of paper saying she was made aware of the results.

According to the school’s drug testing policy, the school can randomly test all students that drive to school or participate in extra curricular activities like sports.

However, Nemeth takes the bus to school and is not involved in any sport or club at the high school.

According to the policy, that means the school can only drug test her if there is reasonable suspicion she is on drugs while at school.

Tuesday a Penn High School spokesperson told ABC 57 News hearsay is not reasonable suspicion. Yet Nemeth says that’s the reason she was given when she was forced to take the test.

"I have never done anything," said Nemeth. "So I was like really, you are going to listen to hearsay, why would you do that?"

School officials say that they don’t have to notify parents of the drug test unless it comes back positive. It’s something Nemeth’s parents would like to see change and school officials said Tuesday they may consider revisiting the policy to include notifying parents.