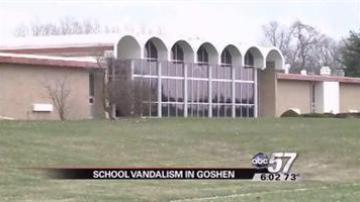 "Prior to April i had no idea who Joseph Kony was," said Sampson. "And that’s the case with a lot of people in America and the world. Kony 2012 was designed to put a face with a name in America.”

But some reactions to the video have not been positive. The recent acts of vandalism at Farfield High School are one of several instances of negative responses across the country.

According to the assistant superintendent for Fairfield, the vandal(s) targeted the school’s new press box, the sidewalk outside the auditorium and the entrance to the school with messages from the Kony video.

But for Sampson and Invisible Children advocates the vandalism is contradictory to the campaign’s goals.

"The cause is about bringing awareness and doing it leagally and respectfully and this doesn't line upnwith that," said Sampson. "So whether the people who did it are actually supporters of Kony 2012 or they were just using it for a reason to spray paint a high school, it wasn't right, its not condoned, and it's unfortunate for the school and the community."