Local hotel to close after more than 40 years 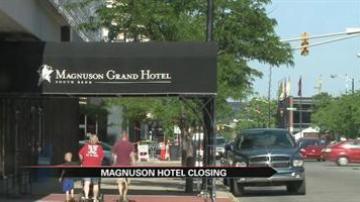 SOUTH BEND, Ind. -- A downtown South Bend hotel is closing its doors after more than 40 years of doing business in the city.

The Magnuson Grand Hotel, located inside the city’s Chase tower, will close on June 13th.

“As someone who works downtown we want the downtown to grow and be energetic,” said South Bend resident Duncan Stroik.

The building’s manager issued a statement confirming the Magnuson Hotel is on its way out.

The manager said they are closing the hotel for “extensive building and hotel renovations.”

But instead of keeping Magnuson inside the building—they are now in the process of interviewing other hotel franchisors.

It’s a business move welcomed by many.

“I’m all for renovating and reviving down,” said Paul Nonte.

The Chase tower’s building manager said years of poor maintenance by its previous owner has led to the decision to renovate.

Some people said they are glad the building is being preserved, since it does hold some historical value in South Bend.

“I’m all about preserving, not tearing down but preserving and restoring and bringing something back to life. And I think it’s probably what the downtown South Bend needs,” Nonte said.

We asked the Magnuson Grand Hotel manager to see how employees are handling the situation and how many are affected. She declined to comment.