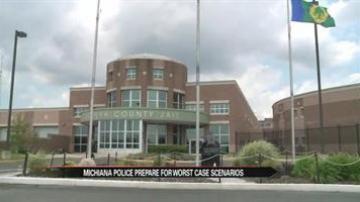 SOUTH BEND, Ind.-- St. Joseph County Police Lieutenant Matt Blank says although we won't know all of the facts about the situation in Ferguson, MO until months down the road when the final police reports are compiled, the race-related crisis could be a learning opportunity for departments across the country and right here in Michiana.

“A huge civil unrest situation like what there are experiencing in Ferguson is pretty much a worst case scenario for any law enforcement agency,” Blank said Wednesday.

Unimaginable circumstances for any city.

“It’s definitely what we don’t want to have in our area and we try to prepare for the worst and hope for the best,” Blank said.

Chaos rampant in the streets of Ferguson has some wondering how far is too far when it comes to the use of military-grade vehicles by local police?

“What we can’t do is second guess another department and what’s going on in their jurisdiction when we don’t have all of the facts and a lot of those facts won’t be available until the after action reports are compiled months down the road” Blank said.

With MRAP vehicles in Berrien, LaPorte and Pulaski counties, and three Hum-Vs in St. Joseph County, today we asked police what kind of violence would it take to put those to use?

Lt. Blank tells us it would need to be a rare situation where military weapons were already involved, for the department to protect themselves and the public.

“Sometimes the people that we face have military grade weapons and we are often outgunned,” Blank said.

That's why departments across Michiana have gotten these special types of vehicles.

“Our goal in law enforcement is obviously to protect the public and especially in SWAT situations, the mission of the SWAT team is to bring any situation to a close as safely as possible,” Blank said.

Blank says he believes the issues in Ferguson give his department an opportunity to review tactics and to prepare for a worst-case scenario.

“I’m sure there is going to be some lessons learned and unfortunately learned the hard way by their department and if we can take something from that and adjust our tactics or adjust our plans and maybe better prepare for the future then we’re certainly going to take a look at that,” Blank said.