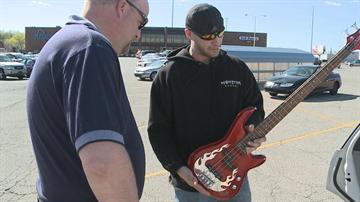 A story about crime became a tale of generosity on Thursday, a local man stepped up to donate to a local band who had been struck by thieves.

On Wednesday morning somebody broke into the home of one of the members of local rock band Full Circle and stole $7,000 worth of equipment including a Traben bass guitar, a Fender jazz bass guitar, a black Kramer guitar, a red semi-hollow body Ibanez guitar, a Behringer soundboard and a Chavuet light rack.  ABC57 ran a story about the theft on Wednesday night.  By chance, Brandon Hunt of Niles had just returned home from work, turned on his television and the first thing he saw was the story about the theft, he immediately called ABC57 to say he wanted to donate his Traben bass to Full Circle.

“I figured it would be a good thing, these guys need it, it will help them out, they need to keep rocking,” Hunt described.  “I felt better giving it to them than letting it sit in my basement.”

Hunt explained that he felt he needed to help fellow musicians and wanted to show that there are still decent people in the world.

“There’s a lot of great people out there and I’d like people to think that too,” Hunt said.  “There are good things that happen.”

Hunt, who works at Michiana Tattoo Emporium in Niles, needed a ride to drop off the guitar.  So, ABC57 gave him a lift to Mishawaka where he got to hand the guitar over to an excited John Hughes, Full Circle’s drummer.

“I’m floored man, I’m just floored, I don’t know what else to say,” Hughes explained.  “It’s people like Brandon here who make us love to do what we do.”

Hughes said it was hard to put into words how much it meant to him and the band that somebody would take such a big step to help them.  The most they’d hoped for from having a news story done about the thefts was to have people on the lookout for the stolen instruments.

“This guy (Hunt) has got a heck of a big heart and I don’t know what to say,” Hughes said has he shook hands with Hunt.

While they’re thankful for the donation, Full Circle would still like to have their own instruments back.  People are invited to view their Facebook page to see pictures of the stolen instruments and, if they see them, call the Elkhart Police Department.