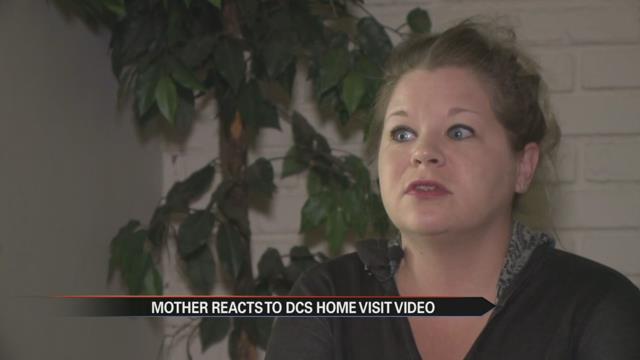 The Department of Child Services has been under fire in recent months, from the way employees interact and report abuse claims to police, to the high volume of cases its social workers are in charge of.

Following a case manager visit at her home on Friday, a South Bend mom feels that other issues need to be addressed as well.

This mom recorded her encounter with three DCS case managers after someone reported she was spanking her child.

Sylvania Nipper said it all started at Dickinson Intermediate School when her 10-year-old daughter was brought home in handcuffs by police on Friday.

Nipper said she disciplined her daughter after she found out she was suspended. Hours later, a family case manager showed up at her door.

She recorded the 15 minute interaction where she was visibly upset. Nipper told ABC57's Alexandra Koehn that she realized she was being disrespectful to the DCS workers, but she explained why she was so upset.

Nipper said, “But really when you have a child, a minor child in that position, and a man knocks on your door saying he’s here to take pictures of your daughter’s naked rear end, in a private room, I don’t think that anybody else’s reaction would be any different."

Six minutes after she requested that the social worker not take the photos, two female DCS workers showed up to exam her child's bottom instead.

In the video, one case manager said she didn't notice any bruising on the 10-year-old's bottom.

Nipper was screaming and using profanity in the video so ABC57 is not posting it in its entirety.

Nipper said, “They should have had the police with them when they came and taken her like usual to a medical facility to be checked out.”

Nipper shared the video on Facebook because she's worried this is happening to others. On Monday afternoon the video had nearly 500,000 views.

Nipper feels like there should be a policy where possible abuse victims are taken to medical professionals and not photographed with cell phones by DCS workers.

Nipper said, “Any phones are easily hacked, and they’re out here taking pictures with cell phones of naked bodies of minors.”

James Wide, the Department of Child Service's spokesperson in Indiana, released this statement after our reporter's deadline: "Federal and state confidentiality laws prohibit DCS from commenting or providing details on specific cases. When responding to allegations of child abuse, it is DCS policy for the responding Family Case Manager to visually assess the alleged child victim's body for signs of physical abuse."