Local museum has collection of meteorites that hit Indiana 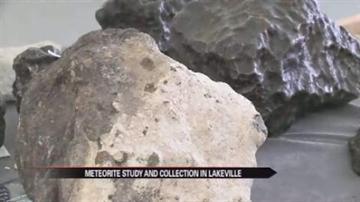 LAKEVILLE, Ind. -- A meteorite no one saw coming plummeted from the sky and injured thousands in Russia. Even though that kind of meteorite is rare, a local museum has a collection of similar rocks.

A meteorite that hit the Earth’s atmosphere at over 40,000 miles per hour lit up the Russian sky with blinding light.

“For ones this size it's very uncommon. This could be the biggest one of our lifetime,” said Phil Whitmer, Director of the Joshua Tree Earth and Space Museum.

It came from the asteroid belt between Mars and Jupiter, but got loose from its orbit.

“If you get two that would crash together, it would knock it out of its orbit and would eventually cross the Earth's orbit,” said Whitmer.

The meteorite weighed ten tons. Why didn’t anyone see it coming?

“Something this small, it was only six feet across, is not something you'd really see with a telescope. So unless they were looking exactly right at that area, there was no way they would have seen it,” said Whitmer.

They've fallen from the sky in Michiana as well

On the positive side, if one crashes onto your property, it's fast cash.

“I'd like a meteorite to land on our property so we could bring it and sell it to Phil,” said Derrick Adkins, a visitor to the museum.

Whitmer says he would happily take it, he’s always looking to add to his rock collection.

Whitmer says meteorite crashes have caused extinction in the past.

He thinks we should study these near-earth objects more than we do. So he's glad this Russian meteorite is garnering so much attention.