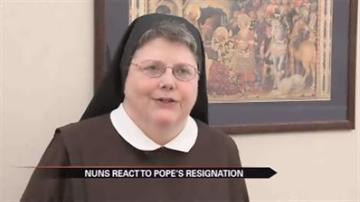 SOUTH BEND, Ind. --The Pope Emeritus is the first pontiff to resign in nearly 600 years making Thursday’s “Closing of the Doors" ceremony a historic one. Millions around the world watched including many in Michiana.

The sisters of Saint Francis of Perpetual Adoration dedicate their life to the Catholic Church. So understandably, they weren't going to miss a second of what will likely be the Pope's last ever public appearance.

They gathered to watch the historic event in the same place they typically watch Irish football games.

Thursday, the atmosphere at Saint Francis was one of respect.

"Quite a bit different, much more festive when it's a football game and people are more excited and rowdy,” said Sister Clare.

They said you didn’t need to be Catholic to appreciate it.

The nuns watched the events on EWTN, a Catholic television channel.

"With a blog I follow, Whispers in the Loggia, and he is a correspondent within the Vatican,” said Sister Madeleine.

The nuns say they'll wait patiently with the help of the Holy Spirit until the conclave picks who will lead the world's 1.2 billion Roman Catholics.

For the next two weeks, they'll watch from the couch in between prayers.

"It's calmer than watching a football game, but there's still that bond because it is a common interest, it’s a common concern,” said Sister Madeleine.

In one of the Pope Emeritus' final acts--he signed a decree that allows the conclave of 115 cardinals to convene before March 15 in hopes of securing a new leader before holy week.