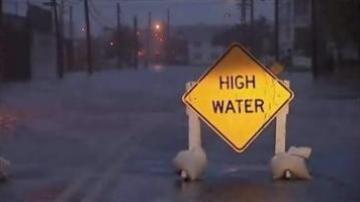 The Indiana Homeland Security Task Forces are made up of several local firefighters and police officers.

Local crews met with incident managers from Baltimore Monday night, just as Sandy reached the inland areas of Maryland. In the meeting, crews reviewed an action plan that will be executed in response to injuries and damage caused by Sandy's high winds.

"They have declared a state of emergency until tomorrow at noon. They are not allowing any people on the streets and they are telling everyone to stay home unless there is an extreme emergency," said South Bend fire chief Jim Lopez.

Lopez, along with 24 other local emergency responders, are braving the harsh winds and rain brought on by Sandy. A total of five ambulances from Michiana were sent to Maryland in anticipation of the storm.

Crews arrived in parts of Maryland and New York late Monday morning, all working tirelessly to prepare for Sandy's arrival.

"It's kind of eerie outside right now, as I said, there are no people outside. It's kind of like a funny feeling. It's something you would see in a movie. There is nobody outside, all the stores are closing," said Lopez.

A total of 107 personnel and 44 vehicles have been deployed from across Indiana. Teams are ready and in place to aid with possible evacuations of hospitals and nursing homes along the East Coast.

However, crews will also be focused on damage and injuries caused by loose debris.

"They are talking about 60 to 70 mile an hour gusts. Hopefully there won't be much damage, but if there is that is where we will start to put our plan of action in place," said Lopez Monday.

"What they are looking at is damage to the neighborhoods where the trees would be falling on power lines and on houses. They pretty much have everything under control, like I said, they have declared a state of emergency where all the vehicles and people are off the roads," said Lopez.

Local teams will be deployed until Nov. 11, unless their assignment is extended.

Even though they sent ambulances from the area to aid the region, Chief Lopez said it will not affect local resources or response times.