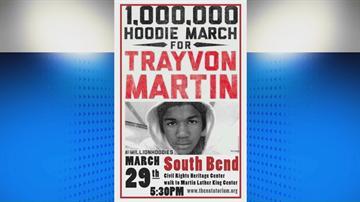 SOUTH BEND, Ind. – Across the country marches and protest movements are growing in response to the shooting death of Trayvon Martin, 17, and the protests will soon be coming to South Bend.

Martin was shot to death in Sanford, Florida on February 26 by George Zimmerman, 28, an armed community watch member who claimed Martin was acting suspicious while walking through his neighborhood and claims Martin assaulted him.  Police have yet to arrest or file charges against Zimmerman, sparking outrage across the country.  Accusations of Zimmerman having racial motivations in believing Martin, an African-American, to be a criminal and shooting him are stirring debate nationwide.  Investigators found that Martin wasn’t under the influence of drugs and was only carrying a drink and a bag of candy when he was killed.

For Muhammad Shabazz, of South Bend, the case hits close to home.

“I too was shot by a white guy who was never arrested or charged with any crime,” Shabazz explained.  “We were at a party and a fight broke out and he shot me, he never got charged with anything…so I guess that’s why I take it harder than most.”

“In this community there have been many people who have posted words of frustration and anger and upset on their Facebook wall,” Dr. James explained.  “There have been many conversations going on around the dinner table here in town.”

A national movement to hold “hoodie marches” is spreading across the country.  Hooded sweatshirts have quickly become a symbol of the Trayvon Martin case.  Theories abound that George Zimmerman judged Martin by the clothes he was wearing, including a hooded sweatshirt.  Protestors are urged to wear sweatshirts when they march.  Shabazz and Dr. James plan to hold a “hoodie march” in South Bend.

“This (the Martin case) shows that this can happen to any of us,” James explained.  “That’s why it’s so important for us to stand-up and to show that we won’t allow this to happen, not in our community.”

The entire community is invited to the march.

The march will be held at 5:30 p.m. on Thursday March 29.  It will begin at the Civil Rights Heritage Center at 1040 West Washington Street and end at the Martin Luther King Center at 1522 Linden Avenue.