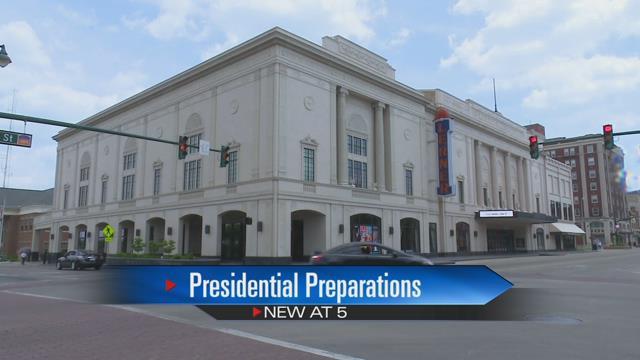 On Wednesday more details are released on President Barack Obama’s visit to the RV capital of the world.

President Obama will be in Elkhart on June 1st and will be landing into Atlantic Aviation in South Bend.

Airport officials and multiple police agencies continue to work out logistics and residents are reflecting on where they are now.

The resurgence is driving some into owning their own small businesses.

Ron Simons owns Ron’s River Dogs and has a cart on Main Street every Wednesday.

His hot dog cart sits near the Lerner Theater and Simons says the traffic on Main Street makes it a great spot for business.

Apparently it is also a great spot for a president to visit.

“Don’t know for sure if they are going to shut this block down or not, I haven’t heard anything from the city that haven’t talk to me yet,” says Simons.

On Wednesday Simons did not know if President Obama’s visit will shut him down for the day.

Back in 2008 he faced bigger uncertainties.

“It was 2008-2009 everything started to kind of tank a little bit the funny bone closed the hurt me a lot,” says Simons.

Simons worked at a local comedy club that closed down around the same time President Obama visited Elkhart to present stimulus money to local manufacturers.

“Yea I was hoping it was gonna come true, it’s improved it’s still not where it should be,” says Simons.

So Simons took a leap of faith and opened his hot dog business in 2011.

In the past five years, he says things have definitely changed for the better.

“You can tell the last year of so that businesses really increased quite a bit more foot traffic and more businesses coming in,” says Simons.

Now he’s hoping for another boom, maybe the president will drop by his stand for a bite to eat on June 1st.

“I would love to be here I think I would do crazy numbers that day,” says Simons.