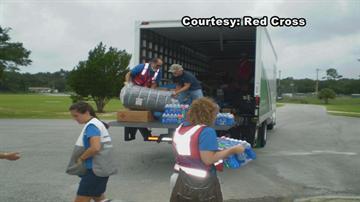 SOUTH BEND, Ind. – Most of the local volunteers from the St. Joseph County Red Cross have returned from the Gulf of Mexico after assisting in relief efforts following Hurricane Isaac.

Richard Mah came back to South Bend on Sunday, he traveled to Florida on August 24 right before Isaac made landfall.

"It is nerve wracking because nowadays if you want to be Red Cross disaster volunteer you almost have to be willing to get in the way of a hurricane,” Mah explained.  “Volunteers are pre-placed and you have to worry about is this hurricane going to come right over me this time."

Mah has been a disaster volunteer for 8-years; coincidentally his first disaster deployment was to Pensacola, Florida for Hurricane Ivan.  For Isaac he and the other local volunteers were first sent to Tampa, but moved west with the storm.  Mah stood at the water front watching Isaac move in almost in the same spot he had watched his first hurricane.

"At the edge of Escambia Bay you know looking over at the water when a rain band came in,” described Mah.  “It makes you feel very small because here you are, a human, and here's Mother Nature coming at you with full force."

Hurricane Isaac made landfall and did most of its damage further west, but the volunteers from Michiana stayed in Florida to help in shelters for those who had been evacuated.

“People who are affected are your most vulnerable, your disabled, those with limited resources,” Mah explained.  “Another function you can do as a Red Cross volunteer is you can listen to their stories because they need to talk about it.”

Most of the local volunteers are now back home; a few remain in Louisiana and Mississippi where most of the damage was done and where many are still without power.  Richard Mah said it’s possible he may be sent back to the area to help with relief efforts.

The Red Cross is still seeking donations and volunteers for relief efforts in the wake of Hurricane Isaac.