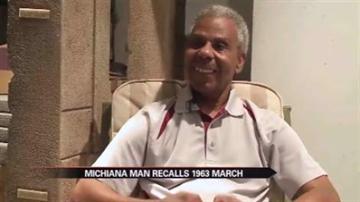 BENTON HARBOR, Mich. -- Wednesday is the 50th anniversary of one of the most famous speeches in American history. On August 28, 1963, Dr. Martin Luther King Jr gave his 'I have a dream' speech. We spoke with a Benton Harbor man who was there on that historic day and heard the speech first-hand.

Alfred Holliday was a college student in 1963. He was selling books in Connecticut and bought a $400 Fiat to make the eight hour drive to Washington DC for the march.

"It was a thrill to be there," said Holliday.

That's what Holliday remembers about the historic day.

"It was a very interesting trip because I didn't think the car would make it," said Holliday.

To his surprise, the car made it. Once there, he joined thousands just like himself

"There was a tremendous traffic jam, cars from just about everywhere and they were coming from east, west, north, south, every highway at that time," said Holliday.

Holliday remembers hearing music in the air, not from musicians or singers, but from the crowds of people who came to hear Martin Luther King Junior speak.

"The whole thing, there was just singing all over, people were singing all kinds of songs, freedom songs, and everything. It was just so beautiful," said Holliday.

He may have arrived alone, but everyone there became family through the events of that day.

"Everybody I'd meet, it was just that they knew you already. And they were white, black, and just everybody being there," said Holliday.

He remembers the speakers telling the crowds why they were all there.

It's a message that he hopes the world will hear.

"I'm connected to somebody's arm and arm and closing your eyes and you don't see any color, all you see is that somebody is connecting with me," said Holliday.

Holliday stressed that kings speech taught us how to look out for each other, no matter what we look like.

He said history repeats itself, so we must learn from our past to better our future.