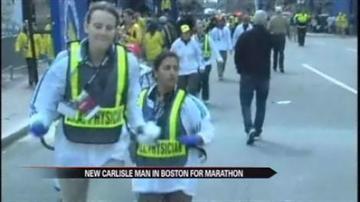 BOSTON – There were nearly two dozen people from Michiana registered to run in the Boston Marathon Monday. We spoke with one local runner who crossed the finish line an hour before the explosions.

David Dodd from New Carlisle started the Boston Marathon at 10:20 a.m. Monday, in the second wave of runners.

He finished about 2 p.m., just 50 minutes before the deadly explosions.

Had he been in the third wave, he likely would have ended up in the area of that blast based on the speed he ran the marathon.

He says at the time, the area was packed with people shoulder to shoulder.

Dodd says he and his kids were almost to the first train when the explosions happened.

Dodd says he can't imagine why someone would want to target the marathon.