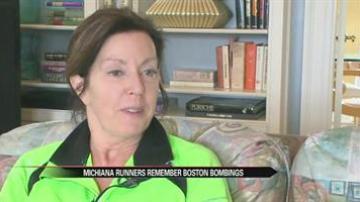 ST. JOSEPH COUNTY, Ind. -- A local runner who participated in last year's Boston Marathon plans to return this year to show support for those who lost their lives or were injured one year ago when two bombs exploded at the finish line.

Two local runners were there when the bombs exploded.

"I turned around and looked and you could just see this huge cloud of smoke and debris everywhere and I just remember thinking, 'Oh my gosh.' I just ran past there it was just full of people, all of those people," said Lisa Smith.

"We start seeing SWAT running around, guns everywhere with the cops, everybody was out there it was crazy," said runner David Dodd.

Smith was with two other runners from South Bend that day.

"I work at St. Joe, I'm a critical care nurse so my initial reaction was I need to go back and see if I can help," said Smith.

Dodd says he was confused, shocked and angry when the bombs exploded. He finished the race about half an hour before the bombs went off.

He and his family were on their way back to their hotel when the bombs exploded.

"They kicked us out of the subway. They said subway's closed and they wouldn't tell us what was going on and that's when our phones started ringing off the hook from home. They knew about it before we did," said Dodd.

Smith plans to return to run the race again this year in honor of those who lost their lives that day.

"There was no way we weren't going to go back and run and show our support for the runners and the community and Boston too its' just a great town," said Smith.

DODD says he is determined to go back.

This year he says competition was tougher because there were 5,000 runners in his age group that didn't get to finish last year. They were given first dibs this year.

He says he almost made the cut.