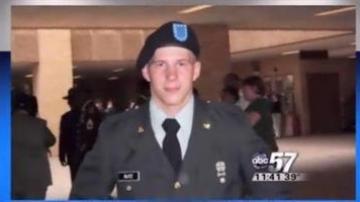 CHESTERTON, Ind. -- Spc. James A. Butz, known to his family and friends as Jim, was killed in Afghanistan Wednesday when his unit came under attack by insurgents.

His father, John Butz, says he knew it was a possibility that his son could die in the line of duty, but he says nothing prepared him for the news he received Wednesday.

"It's definitely a shock, I think I'm still in a state of shock," says John Butz.

The 21-year-old was serving in the Helmand province, in Afghanistan, as an Army medic when his unit came under attack.

The Porter, Ind., native was killed when a roadside bomb when off while he was trying to save a wounded soldier -- a selfless act his family says makes him a hero.

"He died in the line of duty, that makes him a hero in my opinion. All of them are, he was the 447th person, of the U.S. troops, to died in Afghanistan."

Butz joined the army back in 2009 after graduating from Chesteron Senior High School. A football player and wreslter in high school, he was well know and well like on and off the field.

His family says he had plans of serving and then going to school to be an registered nurse, up until recently though.

"Two weeks ago, the last time I talked to him and he said he loved what he was doing and had decided to re-enlist in October when he became eligible to do so."

His family and friends says he was just doing what he love – serving his country and helping people.  His family says he will be dearly missed by everyone.