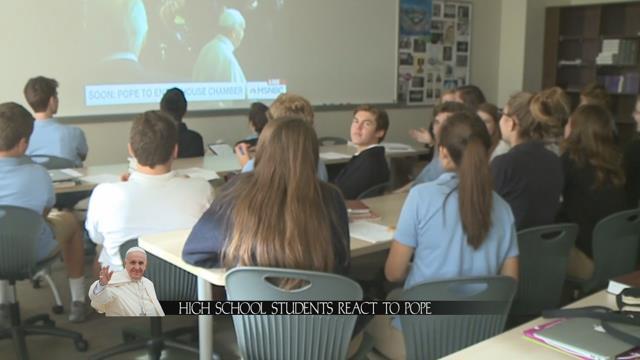 On Thursday morning at St. Joseph High School in South Bend, all eyes in every classroom were glued to Pope Francis addressing our country.

Students were excited to witness this monumental moment in our nation's history.

Under a crucifix with a statue of the Virgin Mary peering down upon them, 25 sophomores watched Pope Francis address a joint congress.

For theology teacher Tom Kostielney, this was a special moment.

Kostielney said, “It’s just cool to see them geek out about it in a way! I mean we had students bring in cookies for it, it’s a big event and cool that they cared.”

Students passed out Pope cookies for the viewing and applauded when the Pope took the podium.

Trey Miller said,“We came together from different countries which I think was his point because everybody was foreigners so we should let foreigners in now.”

Trey Miller and Mary Rose Weber interpreted what the Pope was saying about immigration.

Weber said, “Do we have the right as people who also immigrated to say no you are not allowed? I don’t feel like we should because we should be open to everyone and let everyone come in.”

Among other national topics, the Pope addressed the issue of climate change.

Weber said, “We have to preserve the world we have right now, our world, so that future generations can use it. We don’t want to screw them over and be like okay we’re going to use all the resources good luck fending for yourself.”

Miller said, “I think we kind of need to cut down on our waste because we are kind of a wasteful country.”

Weber wants to be a journalist when she grows up and Miller wants to work in business.

While she may experience change as she grows up, Weber said her faith and love for Pope Francis will remain constant.

Weber said, “It just affects me so much on a spiritual level to hear the Pope saying this and everything that I feel so strongly about!”