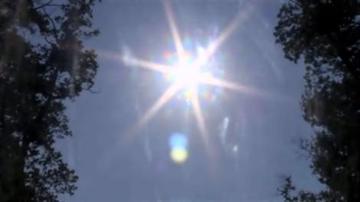 SOUTH BEND, Ind.-- It felt like 100 degrees at times on Tuesday. It's not record breaking heat, but temps did top off at almost fifteen degrees higher than normal, making some people sweat a lot more than they would like.

John Beven's taking one for the team and braving the heat now so his yard looks good on game day.

“It has to be done,” said Beven. “Home opener is on Saturday, so got to make it look good for people that are coming into town."

Especially under all those pads, jerseys and other equipment.

Price and his teammates from Holy Cross and Christ the King practiced a little lighter, something that parents say they appreciate.

“I can notice the pace of the practice has dialed down a little bit so they're very well aware of the conditions,” said Tom Pennino, father and South Bend firefighter.

Pennino knows the heat better than most. He's a South Bend firefighter and says he's trained his son well.

"Keep hydrated, pace yourself,” said Pennino. “If you start feeling dizzy, if you stop sweating that's a key sign of either heat exhaustion or heat stroke."

And even a boy along the sidelines wanted to add his two cents. He says he can't learn when he's all sweaty.

“So when I sweat and this sticks to here [pulls at shirt] I try to pull it up but my teacher's talking so I’m more distracted,” said Richie Mayfield.

His friends on the field might be hoping for a touchdown, but he's wishing for a cool down.