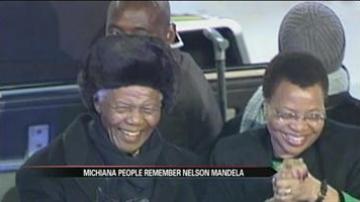 MISHAWAKA, Ind. -- Flags flew at half staff Saturday as the world mourned the loss of Nelson Mandela.

The death of the former South African president weighs heavily on the hearts of those in Michiana.

He was a man whose impact was felt worldwide.

Catherine Bolton, a professor at Notre Dame, conducted research in South African in the 1990s, only five years after Nelson Mandela was freed from prison.

She says his sacrifice and lifelong struggle for equality will be remembered, and his impact felt, across the world.

"He's given the world the opportunity to see that no one is so different from you that you can't find a common ground with them," says Bolton.

Mandela's funeral service will be held at his family's home in the Eastern Cape on December 15.  It will follow 10 days of national mourning.

President Obama and the First Lady will travel to South Africa to pay their respects and participate in the memorial events.