Look inside a tiny home in South Bend 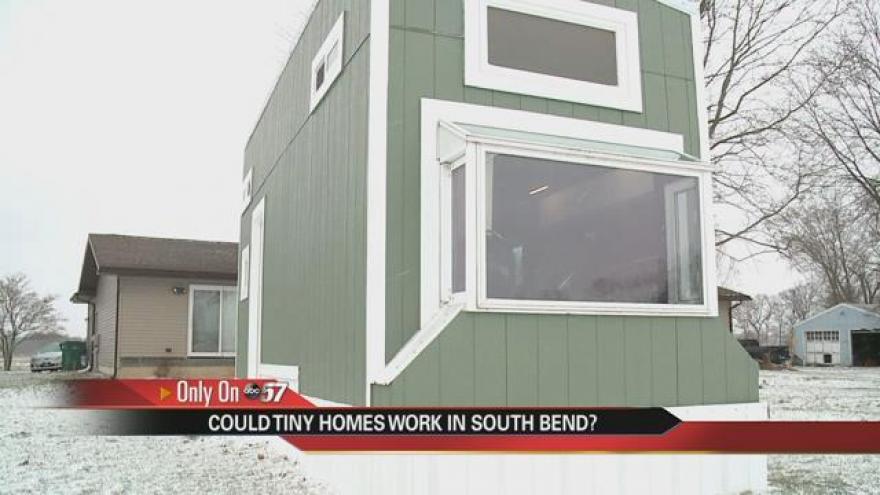 During Monday’s South Bend Common Council meeting a group of citizens are expected to bring up the topic of tiny houses. They will be asking for a way to make their micro homes fit city code standards.

“The best thing about this house is it is ours and it doesn’t feel small because it has everything we need,” says Nikki Stillson, a tiny home owner.

Nikki Stillson has lived in her tiny home since September 2015. She sits in her bed, her head almost touching the ceiling, but says her home offers the perfect amount of space for her and her husband.

“A lot of our friends say I could never live in a tiny house. They say because they would kill their spouse, or whatever. But for us we have our own separate spaces,” says Nikki.

In addition to the bedroom which is only about four feet high the 170 square feet home has a bathroom, a kitchen and a living room.

“We realized we are at our day jobs all day and we are at home for a couple hours at night and we are really just at home to sleep. The only con I would say is I don’t have an oven and I miss baking,” says Dave Stillson.

This eight by eight kitchen is missing an oven but there is still a stove top. Pots and pans, dishes and glasses and a spice rack are completely organized

“I had to like weed down which spices I wanted to keep because we had a crazy spice drawer,” says Dave.

Cutting back on space and belongings isn’t necessarily for everyone.

Although friends of the Stillson's think the different way of living is neat the trailer the house sits on means they aren’t following south bend housing codes.

“It’s a mobile unit not a fixed unit but if you find a mobile home park or designated area that allowed these you could easily move it in there and live there,” says Charles Bulot South Bend Building Commissioner.

Bulot says the minimum requirements for a home are one six by six bath room and a 120 square feet living area. As long as those guidelines are met then the construction of a small home falls within code.

For the Stillsons it’s the trailer that creates the problem.

Dave says he and other tiny home dwellers want their homes with or without a trailer to be allowed closer to the amenities of downtown and they could help fill empty lots.

“I think something like this would be a good way for infill housing to fill in some of the neighborhoods and bring millennial age people that are wanting to have careers into the city of South Bend,” says Dave.