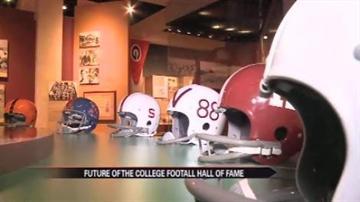 SOUTH BEND, Ind. -- The College Football Hall of Fame is moving to Atlanta. This Sunday will be the last day that the Hall of Fame is open to the public.  This weekend it will only cost $2 to get in.

The Hall of Fame said they want to make it easily accessible for everyone to visit the one last time.

Many in the community feel a strong connection to the College Football Hall of Fame.  From the people who work there, to those who work nearby, and people who have a love for college ball.

Small business owners near the Hall of Fame said that a lot of their customers are people who stop by on their way to the Hall.

They are worried that without the Hall, they will not have nearly as much business.  But this is something that they have been anticipating for a few years because the move has been in the works since 2009.

"It's certainly no surprise to anybody that we're moving." said Kent Stephens, the Hall of Fame Museum historian and curator.

But Stephens said he does not know what the future holds for the people who work at the Hall.

"I have absolutely no knowledge of what the city's plans are."

The Chamber of Commerce of St . Joseph County released this statement:  "We are certainly disappointed by the closing.  Over the years the hall has brought hundreds of thousands of visitors to our community. That being said, the closing also presents an opportunity for downtown South Bend to redevelop the site in a manner that again is a focal point of downtown."