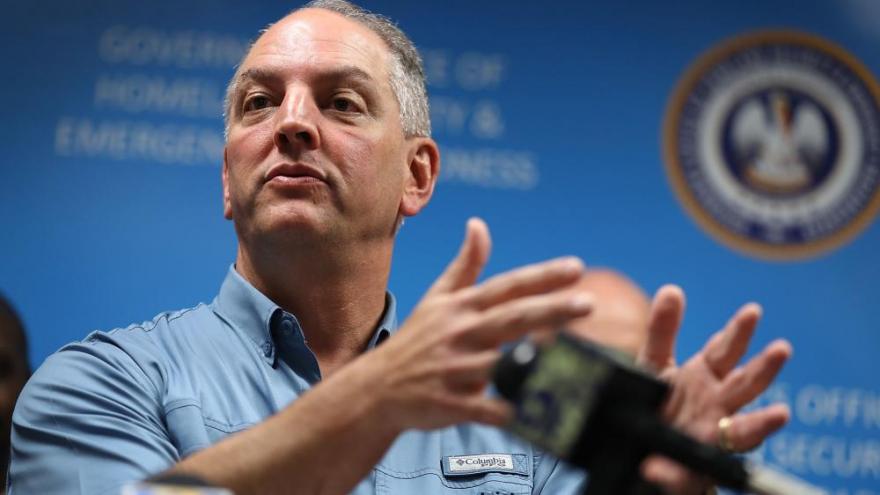 (CNN) -- Louisiana Democratic Gov. John Bel Edwards on Sunday said his state could run out of ventilators by the end of the week if the number of confirmed coronavirus cases there continues to surge.

"Every day we get new information that informs our modeling. We now think it's probably around the 9th of April before we exceed our ventilator capacity based on the current number on hand and that we're a couple of days behind that on ICU bed capacity being exceeded," he told CNN's Jake Tapper on "State of the Union."

"As we achieve success in slowing the rate of spread, we also push out that date. And critically important is the number of people who will present to the hospital and not be able to get a (ventilator) or a bed, it's a smaller number."

Louisiana has emerged as one of several coronavirus hot spots across the United States with a surge in the number of confirmed coronavirus cases and deaths. The state has more than 12,000 cases and more than 400 deaths, according to Johns Hopkins University's tally of cases. Early Sunday, the nationwide death toll had gone up to at least 8,503 people, with at least 312,245 infected, according to the data compiled by Johns Hopkins.

Edwards continued, "So we're encouraging everyone in Louisiana to take social distancing, the stay-at-home order, very seriously because that's how we're going to save people's lives at the end of the day."

Modeling cited by White House officials projects that, even with stringent mitigation efforts, between 100,000 and 240,000 Americans will die from coronavirus. President Donald Trump has refrained from issuing a nationwide stay-at-home order, preferring to leave it to states to decide.

Just eight US governors have decided against issuing statewide directives urging their residents to stay at home as the outbreak escalates.

The governors, all of whom are Republican, have offered a variety of explanations for why they have not followed the lead of their peers.

In doing so, they've collectively ignored the stay-at-home pleas of Dr. Anthony Fauci, the nation's top infectious disease expert, who said in a CNN interview: "If you look at what's going on in this country, I just don't understand why we're not doing that."

Governors have pleaded for federal assistance in responding to the virus, while complaining of competing against each other for medical supplies.

New York Democratic Gov. Andrew Cuomo on Sunday warned that his state, which has over 120,000 confirmed coronavirus cases, is "running short on supplies all across the board." He also added during a news briefing that the number of coronavirus-related deaths has been dropping "for the first time" over the past few days, but said it's "too early to tell." There have been 574 new hospitalizations across the state, a lower number than before, Cuomo said.

Illinois Gov. J.B. Pritzker told Tapper on Sunday that, "We're looking everywhere and anywhere across the world to get ventilators" as the number of coronavirus cases in his state has exceeded 10,000.

Pritzker, a Democrat, criticized the President over his delay in using his powers under the Defense Production Act to have companies manufacture more ventilators.

"The President does not understand the word 'Federal.' Federal Emergency Management Agency," he said. Pritzker added that, "individual states can't possibly do what the federal government can do."

"There's no way that we could stockpile in anticipation of a pandemic that no one anticipated ... If they had started in February building ventilators, getting ready for this pandemic, we would not have the problems that we have today, and frankly, very many fewer people would die."

Trump, in turn, had some biting criticism for Pritzker during a news conference at the White House Sunday evening, saying that the Illinois governor "has not performed well."

While discussing the number of ventilators the federal government is sending to states through FEMA, the President said that, "amazingly, 600 will be going or have gone to Illinois."

"And there's a governor, I hear him complaining all the time," Trump continued. "Pritzker. I hear him, he's always complaining, and yet I said, just give me a list of things we've done in Illinois, and we're building a 2500 bed hospital in McCormick Place."

Trump said that the federal government is "helping to staff it, and probably will end up staffing it because he's not able to do what you're supposed to be able to do as a governor."

The President has sought to blame states for their lack of supplies in their stockpiles. On Saturday, Trump said, without citing examples, that he believes some states have asked for more ventilators than they will actually need. He then repeated the claim that the federal government has thousands of ventilators it can move to coronavirus hot spots if necessary.