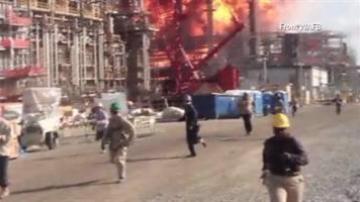 GEISMAR, La. — At least one person is dead and more than 70 others injured in an explosion at a chemical plant in south Louisiana.

Officials say they believe they have accounted for all of the 600 people who were inside at the time of the blast.

The plant erupted into flames on Thursday and sparked widespread fears and panic from workers and many people nearby.

A witness says that they saw flames shooting up in the air and saw that the whole unit was on fire.

Early tests did not indicate dangerous levels of chemicals around the plant after the blast.