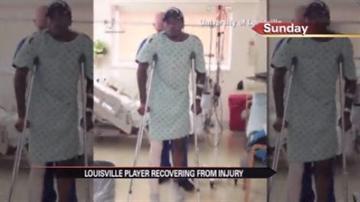 INDIANAPOLIS -- The Louisville player who broke his leg during the NCAA tournament on Sunday is recovering from his injury.

Kevin Ware tried to block a shot, came down on his leg the wrong way and it snapped in two different spots.

As Ware cried out in pain his teammates could not even look at the gruesome injury.

Monday, his coach says he is feeling better at an Indianapolis hospital.

"For the last 16 hours, we've felt awful... but we feel good now," said Rick Pitino, Louisville Basketball Coach. "I had a tough night, but I feel great now knowing that he's smiling, that he's OK."

Ware is scheduled to be released Tuesday.

He will go back to Louisville just in time to travel with his team to Atlanta for the Final Four this weekend. Ware hopes to watch courtside.