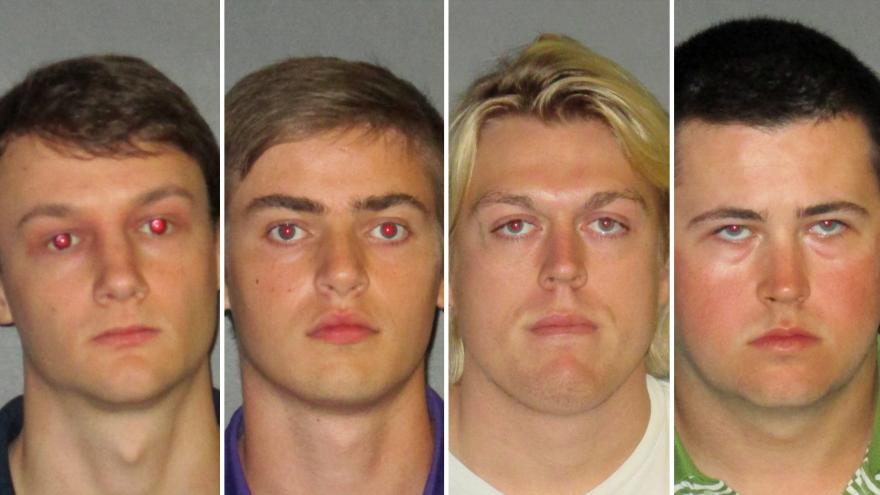 (CNN) -- Four suspects in the alleged hazing death of a Louisiana State University student were indicted Thursday, according to the East Baton Rouge District Attorney's Office.

Gruver, who was pledging the Phi Delta Theta fraternity at LSU, died in September as a result of a hazing ritual, officials said.

An investigation by police indicated Gruver was forced to drink alcohol as part of the initiation rite. The coroner's office ruled Gruver's death was accidental and caused by "acute alcohol intoxication with aspiration." His blood alcohol level was 0.495% at the time of his death, the coroner said.

Police initially issued arrest warrants in October for 10 Phi Delta Theta members as part of the investigation into Gruver's death.

The grand jury heard evidence against five other suspects. In four of those cases the grand jury could not reach a consensus on whether to charge the suspects, and in a fifth case the jury declined to bring charges, Moore's statement said. His office previously decided not to pursue criminal charges against another suspect.

Evidence was also heard relating to LSU's Phi Delta Theta chapter and whether it had a criminal liability for hazing, but the grand jury could not come to a consensus that it had.

John McLindon, an attorney representing Naquin, said he and his client were "prepared to go to trial."

"No one forced Max Gruver to drink," McLindon said. "I'm prepared to show that my client is not guilty of negligent homicide."

Forde's attorney, Kris Perret, said in a statement the "grand jury's decision confirms what Patrick Forde has said all along, that he was not responsible for the events that led to the very sad and unnecessary loss suffered by the Gruver family."

Perret added Forde was "no longer an active member of the fraternity" at the time of Gruver's death. "As such, he had no control or authority over the events that took place at the fraternity house that night."

CNN has also reached out to lawyers for Isto. It couldn't be determined Friday afternoon whether Gott was represented by an attorney.

"While nothing can lessen the pain that we feel, we are pleased to see indictments issued in connection with Max's untimely death," Gruver's family said in a statement sent to CNN. "We hope that other outstanding charges will be brought and we will continue to champion and support legislation that recognizes hazing as a felonious crime."

In Louisiana, the maximum punishment for negligent homicide is five years and a $5,000 fine, according to state law. The maximum penalty for hazing is 30 days and a $100 fine.

Gruver was allegedly forced to drink

The night before he died, Gruver was called to the fraternity house to participate in "Bible Study," according to interviews conducted by LSU police. Fraternity members asked pledges questions about the fraternity, and if they answered incorrectly, pledges were told to "take a 'pull' from a bottle of alcohol," according to arrest warrants. Pledges were also asked to do "wall sits" while fraternity members walked across their knees.

Several interviews conducted by LSU police "indicated that the pledges were forced to drink in excess," according to the warrants. By midnight, Gruver was highly intoxicated and fraternity members laid him down on a couch in the fraternity house, according to witnesses interviewed by police. They checked on him periodically until about 3 a.m.

When members checked on Gruver around 9 a.m. the next day, his pulse was weak and they couldn't tell if he was breathing. That's when Gruver was taken to a hospital, where he later died, according to warrants.

As a result of Gruver's death, the Phi Delta Theta chapter was suspended by the school and the national fraternity, which opened its own investigation into the alleged hazing.