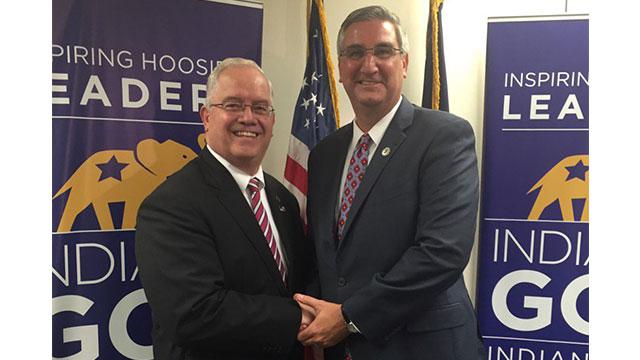 The Indiana Republican Party has named Lieutenant Governor Eric Holcomb as the Republican candidate for governor. Holcomb announced his intention to run after Governor Mike Pence dropped out of the race to run for Vice President.

The announcement was made at 2 p.m. Tuesday.

I am honored to receive the nomination of the Indiana Republican Party to serve as our candidate for Governor. I’m thankful to the community and grassroots leaders who endorsed my campaign in the past several days and look forward to working with them – and everyone – as this campaign officially now kicks into high gear.

This year has taken many twists and turns, but I am ready to answer the call, ready to lead us to victory and ready to take Indiana to the next level.

We have accomplished a great deal in the past 12 years – and I’ve not only had a front row seat, I’ve been at the table helping Governor Mitch Daniels and Governor Mike Pence build and grow our state.

We cannot allow our state to go backwards to the days of debt, delayed payments to schools and unfunded infrastructure projects.

The only way we continue Indiana’s progress is by joining together – as a team – to do what we do best: balance budgets, cut taxes, invest in education and infrastructure, and work every day to make Indiana the best place to live and do business in the Midwest.