Luecke:"Still a lot of work to do" 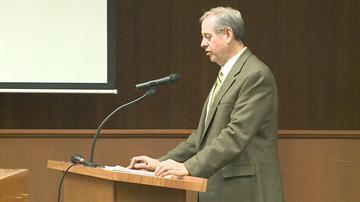 SOUTH BEND, Ind. – Mayor Steve Luecke has only a short time left in his 15-year term as mayor of South Bend.  The South Bend Common Council honored Luecke for his time serving as the 31st mayor of South Bend and for being the city’s longest serving mayor at their meeting on Monday evening.

“It was very nice to have the recognition,” Luecke explained.  “I’m really deeply honored to have had the chance to serve as mayor of this community, it’s a wonderful city.”

But, in his last few weeks as mayor, Luecke explained he still had a lot of goals to accomplish.

“I feel exhilaration in terms of completing a number of projects that we’ve been working very hard on,” Luecke explained.  “Wrapping up the St. Joe project is a great relief to me, to get the details finally taken care of on that property.”

Earlier on Monday the city completed the process of selling the controversial Family Dollar property to make way for the new St. Joseph’s High School.  But, that wasn’t the last of Luecke’s goals.

“There’s obviously the question of whether we’re going to participate with the proposed development of the Chase Tower,” he described.

At Monday’s meeting, the common council had its first reading of Luecke’s bill proposing that the city pay $5.7-million to support a private developer who is looking to buy and refurbish the troubled Chase Tower.  As part of the plan the city would receive an interest in the building’s parking garage.  Luecke has proposed using money from the reserve and general funds to pay for the city’s part of the deal.

“That’s still up in the air, we’re still having discussions with the developer and obviously the council has final say on whether we participate in that,” he explained.

The common council is set to make a decision on the Chase Tower issue at a special meeting on December 19th.  Aside from that issue, Luecke said he also has plenty of work to do to make a smooth transition from his administration to mayor-elect Pete Buttigieg’s administration.  At this point, he said he’s looking forward to the end of his final term.

“We’ve been working awfully hard running right through to the finish line,” he explained.  “Nostalgia will set in a little later as the holidays move past and we move into next year and I start looking for something new to do.”

Mayor Luecke’s final day in office will be January 1st.