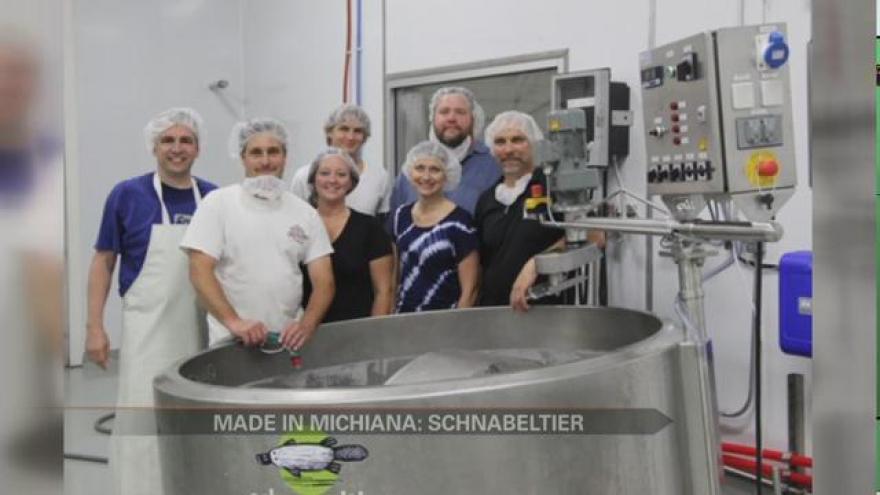 FULTON COUNTY, Ind. - Made in Michiana is highlighting a new business in Fulton County. Schnabeltier is whipping up specialty cheeses and wines right off of U.S. 31, and the owners say they're working to bring a taste of Europe to Michiana.

Matt Sutton and his two business partners, Rex and Chris Robinson were born and raised in Rochester, and after years of travel to Europe, they decided to bring artisan cheese and wine to their hometown.

“We looked at the possibilities and it made a lot of sense because there's an incredible amount of good dairy produced here in Indiana, but very few cheese companies making high-quality cheese,” said Matt Sutton, Schnabeltier Vice President of Sales and Marketing.

So they opened their own operation last October. It's called "Schnabeltier," German for platypus.

“It kind of fit because it's a mismatch of a couple of different animals, wine and cheese,” Sutton said.

They say there's nothing like Schnabeltier in the Midwest.

“We use the term Midwest because we can't find it anywhere else and I didn't want to offend anybody that might be in California and actually doing this and we can't find them, but there are no other places that make cheese and wine in the same facility,” Sutton said.

Schnabeltier features 16 different types of wine and at least six flavors of cheese. In its seven months of being open for business, Sutton says they've seen nothing but success.

“We are selling all the wine we can make. We're looking at already doing an expansion. We've already expanded once since October. We want to expand the wine production and the cheese production and increase distribution,” Sutton said.

Glenn Goss is behind Schnabeltier's daily operations. He says Sutton brought him on board last year because of his passion and expertise in cheese making.

“Right now I have about 250 gallons of milk and it'll end up at about 200 pounds of cheese,” Cheesemaker Glenn Goss said.

Goss says it's important that everything that goes into their product is local.

“We have about ten-thousand pounds of cheese, even our oak, this is all oak, even the posts all came from Peru, which is 20 minutes from here,” Goss said.

He even gets his main ingredient right down the road at Dog Lake Farms in Bourbon.

As for the process, Goss says it doesn't take long.

“Once we get to dipping that cheese out and we get it in the molds, that takes 20 minutes and then we're cleaning,” Goss said.

The longest part takes place once the cheese is out of the molds and stocked in a temperature controlled room.

“I like to have cheese in here, even three months,” Goss said.

Like the cheese, Goss says the wine-making process is also very hands-on.

“Even cutting, we don't have a machine that cuts, we hand pack it the same way as the wine. We have one filler. Everything is still kind of personal,” Goss said.

These thousand liter vats hold 265 gallons of wine. This filler hooks up directly to the valves, allowing them to hand fill each bottle. Even the packaging is designed at Schnabeltier's main location, by Sutton himself.

“If you look at all of our packaging, we have pairings of all the different pairings on them, so if you pick up a bottle of Schnabeltier wine, you can look at it and see what Schnabeltier cheese actually pairs well with it,” Sutton said.

Schnabeltier not only sells its product to anyone who would like to stop by for a taste, Sutton and his partners also provide to restaurants in the region like Lasalle Grill in South Bend and Goose the Market and Milktooth in Indianapolis. And they say they would like their reach to span as far as Chicago, Detroit and Cincinnati.

“This movement doesn't show any signs of slowing down and we banked on the fact that it wouldn't,” Sutton said.