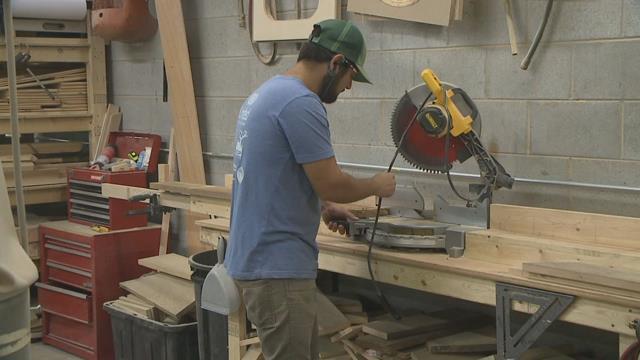 ABC 57's Made in Michiana series headed to a small, artsy town with a population of just under 5,000 people to check out a wood shop that's giving old metal a new twist.

Nestled in the back of an old warehouse sits a small and unique wood shop called Zincsmith.

“This is not a factory where we kerchunk things out. Everything is made by one or two people who follow the job all the way through from the start to the finish,” Zincsmith founder Mathew Thornton said.

Not only do they specialize in craftsmanship and handmade pieces, they also incorporate zinc to give their furniture a rustic look.

“We took chemicals and messed with the patina and zinc is a very reactive substance, you can put almost anything on it and it will change. This stuff has character and you can even see we can make it into these straps and it’s got all this cool vibe on it and that’s what we like the most,” Thornton said.

It all started for Thornton as a fun pastime, a hobby.

“We made the Union Coffee House here, in Buchanan, and we decided at that time to use zinc as the counter tops, it was the first time we’ve ever heard of it,” Thornton said.

But it quickly turned into something much bigger than that.

“A couple of years ago, a designer came into the coffee house and saw the counter tops and went ‘Oh, my god, where did you get those?’ And my daughter runs the Union Coffee House and she said, ‘Well, my dad made those,'" Thornton said.

He says that's the moment his small town shop was able to branch out beyond Michiana.

“The designer said, ‘Give me his number,’ and she calls me and she says, ‘Where have you been all my life? I’ve been looking for somebody who works in zinc,’” Thornton said.

Zincsmith's pieces can now be found in bars and restaurants as far as Miami and Chicago.

"We did a 60 foot bar in Chicago, it’s going to be the talk of the town. It’s huge. And there is a lot of money going into this place, it’s called Bar Sienna in the West Loop,” Thornton said.

A 60-foot bar is only the tip of the iceberg for Thornton. He says new and gutsy concepts are their specialty.

“Do you guys ever do anything twice? I say no, we’re the guys to call when nobody knows how to do it,” Thornton said.

The dream for his Buchanan business? To stay right here, making custom, specialty furniture in Michiana.

“We hope we don’t go anywhere. We love it here. But the dream is to always have enough work that people are asking you to make stuff for them,” Thornton said.

We would love to check out what's being made in your hometown and neighborhood. If you know of a business you would like to see featured on Made in Michiana, just email us at [email protected]