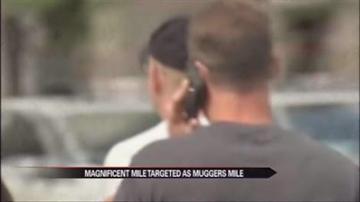 The Magnificent Mile in Chicago is now being called Muggers Mile.

A group called Guardian Angels" have been patrolling the street warning those living there and especially tourists.

They say there has been a rash of muggings, the main target being smart phones.

Some think this group is just scaring people but others say they appreciate the heads up.